If you have a baby chewing on fingers, you’re probably wondering why.

Are your digits just that delicious?

The good news is that these knuckle-dragging nibbles are entirely normal.

There’s no need to panic!

so let’s break down the reasons and learn a bit more about your baby today.

Babies start to teethe any time between 4 – 7 months old

but as you’re probably aware, they also move at their own pace in terms of developmental milestones.

others might be late bloomers that make it to 9 – 12 months before a tooth arrives.

One important thing to understand is that teeth start forming long before you’re able to see them.

The nerves are developing under the gums; the hard nubs are rubbing against the skin.

It’s only when the tooth breaks the surface that you realize, “Oh, my baby is teething.”

Your child, however, might be dealing with the formation of their teeth for months before a canine becomes visible

and they might want to soothe the pain and irritation by gumming at anything within reach.

Fortunately, there are ways that you can get their fingers out of their mouth.

The easiest solution is to offer them something better to chew:

#1 Teething rings come in all shapes and sizes.

In fact, many of them aren’t rings at all; it’s common for teething toys to be shaped like beads, balls, cubes, stars and other uncommon objects that can provide additional stimulation for the baby. 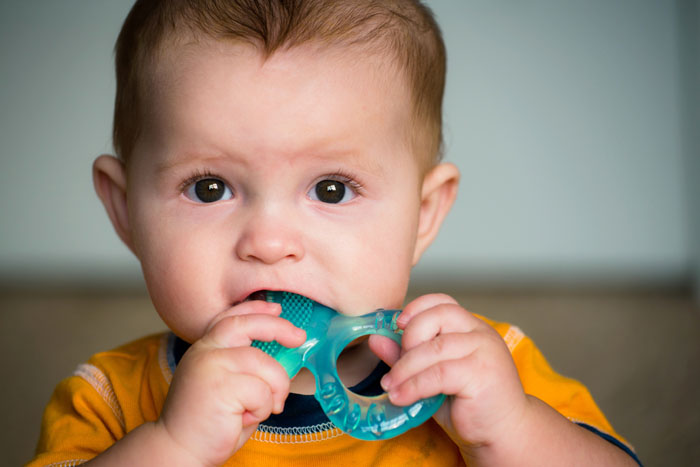 You can try differently-shaped teething toys until you find something that your infant really likes.

#2 Freezable objects can be used as all-natural numbing agents.

The ones designed for teething are usually made of soft, flexible materials like silicone that will retain cold without becoming hard or painful under pressure.

As a bonus, they won’t melt like ice cubes or popsicles.

Just pop them into the icebox for a few hours until they’re nice and frozen, and your baby should reach for them eagerly enough.

#3 Pacifiers can soothe your baby by distracting them from the pain in their gums and satisfying their natural sucking reflex.

A cold pacifier can also double as a numbing tool.

Just make sure that you don’t use them excessively; “pacifier teeth” can develop with extended, long-term sucking.

Hunger isn’t usually the cause of a baby chewing on fingers.

When their little tummy is empty, they’ll let you know by crying, fussing, smacking their lips or even rooting around your chest.

As we’ve mentioned before, however, every baby is different, so you shouldn’t worry if your little one does express their hunger by sucking or biting on their fingers.

It can be especially common in pre-verbal infants who haven’t learned to recognize or vocalize what they want.

so they’ll just mimic their usual feeding motions in a subconscious desire for it.

There’s a simple way to figure out if your baby is sucking on their hand because they’re hungry.

Offer them a snack!

They’ll probably take it even if they aren’t famished; babies are opportunists like that.

so you shouldn’t do it often enough to form a habit.

In an ideal world, you’ll give your baby a regular, consistent feeding schedule so that they aren’t growing hungry enough to chew on their hands at all.

According to researchers, the mouth of a baby is their most highly-developed sensory area.

They use their mouths in the same way that adults use their eyes and hands.

What does this mean for your baby’s hand-chewing habit?

Simply put, it’s nothing to stress about. It’s just their way of exploring their environment.

When they find something interesting, they stick it in their mouths and suck on it.

You’ll notice this behavior a lot as your baby gets older and bolder.

It won’t be limited to their own fingers; they’ll also mouth at other people’s hands, clothes, hair, and jewelry.

They’ll nibble on their toys.

Some babies will even gnaw on the fur of a patient family pet!

The good news is that it’s completely normal.

The bad news is that it can be a difficult behavior to curb.

While there’s nothing wrong with letting your baby go to town on a teething toy, you’ll want to put a stop to their adventures with Fido.

Some things are just gross, even for a parent who has seen it all.

Piggybacking off the theme of exploration, many babies suck on their fingers as they learn how to control their limbs.

It might not seem like a big deal, but think about it: Young infants are just learning how to move around.

It can take them months to develop enough strength, dexterity and fine motor control to stick their fists in their mouths and hold them there.

It’s a culmination of skills that’s both fun and exciting, especially since it’s something that they weren’t always able to do.

It’s a triumph that they can celebrate by drooling all over their digits.

They don’t consciously realize this, of course. Babies don’t have this kind of self-awareness yet.

it’s observed in every single species in the animal kingdom.

If this drive didn’t exist, newborns would be content to lay around all day without moving.

Instead, babies are constantly pushing the limits of their bodies and discovering new things that they can do.

They’re tiny little voyagers of their own oceans. The spit is simply their version of seawater.

What To Do When Your Baby Chewing On Fingers

You don’t have to take any action if your baby is contentedly chewing on their fingers.

If they aren’t sick, hungry or hurting, there’s no harm in letting them play around with their hands and mouths.

You can even take it as a good sign that they’re expressing curiosity in their environment and enforcing control over their own bodies!

That said, there are situations where finger-chewing can become a problem.

If your baby is irritating their skin, for example, you might want to redirect their sucking instincts towards toys rather than knuckles.

If they’ve fallen into finger-chewing as a bad habit or a demand for food, you might want to break that pattern and replace it with another one.

What actions can you take to prevent your baby from sucking on their hands?

How can you stop the slobber without stifling their independence?

Here are just a few ideas:

#1 Give them toys, pacifiers, teething rings and other objects that are appropriate for chewing.

Let them have their fun, but make sure that they’re doing it safely.

#2 Distract them from their old game by initiating a new one.

For example, play a round of patty cake that requires them to remove their hands from their mouth.

Not only is this a gentle way to change directions, but it’s also added bonding time with your baby.

#3 Dab a few drops of vinegar or lemon juice on their hands.

It won’t hurt them, but it might smell and taste unpleasant enough that your baby self-corrects their sucking habit.

Vinegar and lemon juice is also recommended for mothers who are trying to wean their babies off breastfeeding.

#4 Check their gums for signs of teething.

If you notice anything breaking through, you can ask your doctor about giving them a mild painkiller to soothe the ache.

This can put an end to aggravated or distressed sucking.

#5 Rub their gums with a cool, wet washcloth, or dip your fingers in cold water before softly rubbing them around your baby’s mouth.

This is a milder version of giving them a frozen teething ring, and it’s especially useful for very young infants who started teething early but lack the chewing capabilities of older children.

but instead of being a disposable object that they can reject or ignore in favor of their fingers, the mittens will be secured to their hands.

Babies are strange, wonderful little creatures, and sucking on their hands is just one of the ways that they might mystify you as a parent.

As you’ve learned, however, it’s a completely normal action and rarely a cause for concern.

Don’t be alarmed by a baby chewing on fingers.