My Milky Baby
Home Sleeping How To Get Baby To Sleep Without Swaddle? (The 2 Opposite Methods)

From the moment of learning you were pregnant, you were on a quest to find all the perfect answers

and be the best parent possible for this new precious treasure about to enter your life.

One of the first prideful moments on that journey is learning how to swaddle your infant.

There’s a certain magic when hospital nurses teach you how to give your little tike the snuggly security of being wrapped so it mimics the calm & reassuring feeling of being in the mother’s womb.

What an unfortunate dilemma that now you must consider how to get baby to sleep without swaddle.

First, Do I really need to get my baby to sleep without swaddling him/her?

Is there an age at which it is advisable to begin transitioning?

And then there’s the all-important king of all questions, what is the best way to transition for swaddling.

Be rest assured, for any parent who has relied on swaddling the question comes up and there are various ways to accomplish weaning your kiddo from the swaddle.

Stay here and explore the many successful options with us.

When Is The Best Time to Stop Swaddling?

The first good question is when or is there a recommended time to stop swaddling.

There are cultures where babies are swaddled up until one year old. Honestly, the answers to this question are widely varied.

In swaddling discussion groups, you’ll get reports of everything from swaddling up until the child is 18 months old, stopping at 2 months old – and everything in-between.

The official word from the American Academy of Pediatrics(AAP) is that swaddling is a safe sleeping choice during early infancy.

AAP recommends that the choice to stop swaddling be based upon the baby’s ability to roll over.

It is important to place your baby on his back when putting him to sleep.

The risk of sudden infant death syndrome is heightened if they are swaddled and can roll over where accidental suffocation can occur.

The ability to roll over occurs around 2 months old.

Having learned about the risk of rolling, many parents will quickly commit to transitioning immediately rather than take that chance.

Others will continue swaddling the baby and place them on their back to sleep, but closely monitor them so they don’t accidentally roll over.

Other parents will find the ease and convenience of swaddling a greater priority than the SIDS concerns.

Whichever side of the fence you’re on, many parents find that making the decision to stop is one thing and getting the child to adjust to the change is quite another.

So again we’re left with that question, how to get baby to sleep without swaddle.

In reviewing parent experiences, there would appear to be a great many approaches to getting away from swaddling.

There is one universal truth.

All parents who have had success with swaddling will initially say, “My baby won’t sleep without swaddle“.

This is just an initial inner desire not to stop swaddling.

The act of transitioning out of swaddle is not a comfortable idea for parents to contend with.

In countless cases of reviewing parents testimonies, there wasn’t a single account of a parent who didn’t ultimately succeed in weaning their tike from the swaddle.

Many doctors will dismiss transitioning away from swaddling as a non-issue and simply tell the parent to put them in the crib on their back without the swaddling and let them “cry it out”.

They contend that the infant will make the discovery on their own that they can fall asleep without the swaddling or in the arms of Mom or Dad.

This method clearly presents a bit of discomfort for both parent and baby.

This approach involves laying the child in bed on his back and then leaving the room where the child will have to negotiate new conditions where he can fall asleep.

Very often parents can’t withstand the temptation to rush in and reassure the child – ending both the crying spell as well as the important learning for the baby that he can indeed fall asleep on his own and without a swaddle.

The baby will get tired enough to fall asleep.

In truth, this method absolutely does work – but many a parent just doesn’t have the heart for it.

These sweet little bundles of joy really are far more resilient than any parent would ever believe.

Many parents report trying the cold turkey method and claim that it didn’t work.

Of course it didn’t – they interrupted the process before it could work!

there’s a precious story that might open minds who are dead set against following doctor’s orders when it comes to the swaddling discussion.

It might be enlightening to learn about one dedicated and loving mother who tried the cold turkey method – and it worked.

The child could and should have been sleeping through the night at this point, but required many middle of the night wake ups to re-swaddle and get baby back to sleep again.

After much frustration, the young mother elected to give the doctor’s suggestion a try.

As expected, when she put baby in the crib without a swaddle, the baby burst into a crying rage.

The mother forced herself to leave the room and spent what felt like forever in the next room crying herself feeling horrible about her infant daughter’s plight.

Then almost without notice, the crying had stopped.

She snuck into the room and was utterly amazed at what she found.

The baby was soundly sleeping amongst an obviously organized little cocoon of pillows, blankets and stuffies.

Her daughter had clearly figured out a way to make herself feel snuggly and secure and now had a way to get to sleep all on her own.

This technique isn’t for everyone – but it shouldn’t be immediately dismissed as too harsh.

It truly does work. Sometimes Mom & Dad just can’t give it enough time to prove itself to be true.

How To Get Baby To Sleep Without Swaddle? Subtle Substitutions for the Swaddle

There are all sorts of advised approaches that involve some sort of revised way to essentially use other means to swaddle the child that vary just slightly – modifying it from being the child’s swaddle blanket to another method.

Another variation is to place the infant in a sleep sack and tie the arms around him to secure his arms close to the chest.

There are also commercial products to help with this issue; Swaddle Me or Halo.

In each of these methods, the infant is transitioned slowly from being completely swaddled where both the arms

shoulders and legs are tightly bound to give them a secure feeling similar to being in the womb.

Using these substitutions (a modified sleep bag or Swaddle Me product) provides the same tight swaddle for the baby’s upper body while allowing a little extra room for movement on the mid and bottom part of the baby’s body.

The sleep bag method also reassures parents with questions about how to keep baby warm at night without swaddle.

Each of the techniques reported have some strong similarities while the exact method may differ.

As all parents know, babies have the startle reflex in early infancy.

There’s nothing more frustrating than finally getting your sweetie to sleep when they suddenly just both legs and arms straight out from their bodies in a startled jerking movement and wake themselves.

Once they outgrow the startle response, they no longer need the reassurance of a swaddle to sleep.

The concept of securing the arms close to the chest is a very fundamental basis of most transition techniques.

As described before, you can use sleep sacks or commercial products, but other methods can achieve the same goal of securing the arms to the chest and eliminating the harsh wake up when the baby has a jerk from the startle reflex.

One mother reported alleviating this by placing her hand over her child’s arms holding them close to the chest until the baby fell soundly asleep.

Other parents have found success in holding the baby in their arms very tightly as they rock them to sleep to provide the secure sensation of the swaddle.

Watch for “The Signs”

A great many parents who have faced and conquered the swaddling issue describe knowing when it was time to begin to stop swaddling when they began seeing signs which indicated that the child really no longer needed swaddling.

Any parent knows that you can see and read in your children the very most subtle cues that others won’t notice.

Things that indicate the child is naturally transitioning away from wanting the swaddle are things like;

the child wiggles and struggles to get out of the swaddle during the night, you notice that they sleep more soundly during the daytime naps and other times when they aren’t swaddled.

You might also see subtle signs that your baby really enjoys the freedom of unencumbered movement.

The key and overriding theme in achieving success in transitioning your baby away from being swaddled is to first know that there is no one true way to do it right.

The second key to success is understanding that it will be a process and your fastest and most effective way to achieve the goal is to be patient and persevere.

Once a parent understands why swaddling is so successful in early infancy (the manner that it duplicates the safe secure feeling of being in the womb), and then grasps the concept that it’s just natural for all infants to grow beyond needing or wanting to be “bundled” the exact method is up to you.

One thing is certain, we never see or hear of children not being able to sleep without being swaddled beyond 18 months old at the very latest.

By nature, we are intended to outgrow swaddling. This very fact should reassure all parents that it’s a natural process and can absolutely be achieved. 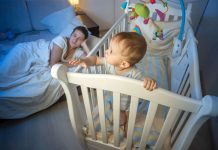 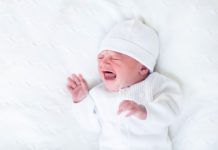 10 Reasons Why A Baby Wakes Up Every Few Minutes At Night? 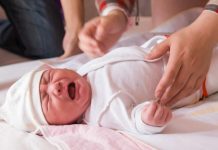 Baby Thrashing In Sleep, Not The Biggest Of Worries