You’ve just brought your newborn home, and all of the morning sickness, discomfort, and labor pain was worth it.

Your child is perfect in your eyes, and you cherish them.

others claim that sleeping on their stomachs or back is the best.

This article will go over which position is safe for your newborn to sleep on, along with what SIDS is and how to prevent this tragedy from happening to your family.

Why Should I Prevent My Newborn Sleeping on Side?

It is not safe for newborns to sleep on their side, as it can cause issues with their health.

Why newborn should not sleep on side?

The following issues may occur if you allow newborn sleeping on side. 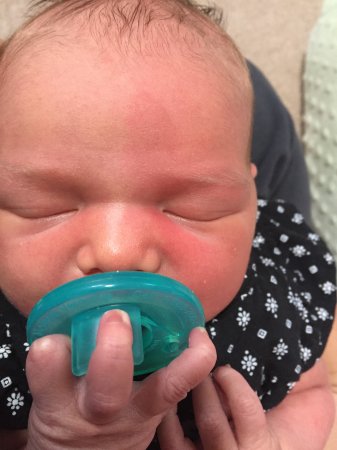 This is seen during the first week of life.

making their body turn red or pink with a clear demarcation that runs through the central axis of the newborn’s body.

This leads to the newborn having a half red and half normal colored body.

The color change will occur when a newborn sleeps on their side for several hours. This condition does not cause any chronic health issues.

This condition occurs due to the infant having blood vessels that have not yet matured.

Flattening of the Skull

The skulls of newborn babies are soft and malleable in order to allow the brain to expand at the same rate as the skull.

Their soft skulls are at risk for developing in a flat shape.

This can occur if a baby sleeps with their head to the side or sleeps on their side for prolonged periods of time.

which allows for pressure to build on a single spot of the skull.

This pressure causes the skull to flatten or sink in.

This can lead to stunted brain growth, as there will be less cranial space for the expansion of the brain.

Flattening of the skull could cause deficits in cognitive development.

The medical term for flattening of the skull is plagiocephaly.

This condition can be treated through the use of head braces (i.e., helmet) to reposition the bones of the skull.

Helmets are prescribed by pediatricians.

Torticollis is a tilting of the neck in a certain direction caused by shortening of the muscles in the neck that connect to the clavicle.

Torticollis is caused primarily by poor sleeping positions. Due to the fact that babies muscles are still growing

the muscles in the neck will shorten if infants are repeatedly placed on their side to sleep.

Infants that sleep on their side have increased risk of choking during sleep.

This is due to the strain that is put on the windpipe (i.e., trachea) and makes breathing more difficult.

Sleeping on the side can also result in regurgitated food being accumulated around the opening of the windpipe.

Sleeping on the side also increases a newborn’s risk for sudden infant death syndrome.

We will show you how to prevent your Newborn from sleeping on Side later, but first let’s talk about SIDS!

Sudden Infant Death Syndrome or SIDS is the unexplained death of a newborn during sleep.

Before this happened, the baby was a healthy child under one year old.

The cause of SIDS is still largely unknown, but it is hypothesized that SIDS could be due to an abnormality in your infant’s brain.

Specifically, the area to do with breathing and waking up.

It is believed that there are both environmental and physical factors that can contribute to SIDS, and they are listed below.

The SIDS risk is decreased if the infant sleeps in the parent’s room.

However, if they’re placed on the bed with the parents, there are more soft surfaces to restrict their airways.

A baby that is put in a wrong sleeping position usually can’t move themselves if they have problems.

If they’re set incorrectly, they can have trouble breathing, or even stop breathing altogether.

If a baby is placed face down on a soft comforter or surface, their airway can become blocked.

If you drape a blanket over an infant’s head, their airway could also end up restricted.

Abnormalities in the Brain

As stated above, it is believed that infants who are born with brain problems are at a higher risk of SIDS.

The part of the brain that helps to control breathing while sleeping is too immature to function as it is supposed to, and this results in tragedy.

A baby that is part of multiple births, or born prematurely has a lower birth weight.

There is also an increased chance that the child’s brain isn’t fully developed yet.

A cold can contribute to a newborn having respiratory problems, and this can increase the chances of SIDS.

Check this video below for more information, higher risk by gender and race:

What is the Best Way to Decrease the Risk of SIDS?

There are several things you can do to minimize the risk of your baby falling victim to SIDS.

The first thing is to place them on their backs to sleep every time you put them down for a nap for the night.

The second thing you can do is to have a designated sleeping area for your baby that isn’t a plush surface.

You should also make sure there is no loose bedding, toys, or soft objects in the designated sleeping area.

These steps can take a lot of the worry out of putting your baby to sleep safely and effectively.

What Should I Do If I Notice My Newborn Sleeping on Side or Rolling to Their Tummy When They Sleep?

If your baby is sleeping on their side prior to being six months, you must reposition them.

Typically, an infant will move onto their side or stomach when their muscles are strong enough to move to that position.

If your child can roll over to their side, this is a sign that their internal organs are stronger and they are at a lower risk of choking during sleep

Your newborn sleeping on side or rolling over is acceptable if they do it themselves after you’ve placed them on their backs.

This is one instance where it is okay to leave them there for the duration of the time they’ll sleep.

If your newborn is still swaddled and starts rolling to their sides, there is an increased risk that they’ll roll onto their stomach and not be able to breathe.

If you’re afraid of this happening, you can either look into alternative swaddling methods or start phasing them out of swaddling altogether.

Do not sandwich your child between pillows in an attempt to keep them on their backs; this can present bigger hazards.

If your child likes to sleep on their side, you should change their habit over time.

How to Prevent Newborn From Sleeping on Side

There are several methods to prevent your newborn from sleeping on their side.

Place your infant on their back

When your infant is sleeping, place them on their back in their crib.

This position has been shown as the best way to prevent sudden infant death syndrome and reduces the development of upper respiratory infections.

Keep pillows and other support structures out of their crib

Do not place pillows or other support structures in the infant’s crib.

Pillows, bumpers, and extra blankets do not provide extra safety or comfort to your sleeping newborn.

Pillows and other support structures may lead to your infant rolling over onto their side during sleep.

Refrain from using sleep wedges or other positioners

Wedges and sleep positioners are not safe for infants.

These products may even encourage your baby to sleep on their side. These types of products have been shown to be suffocation hazards.

Refrain from swaddling your baby

If you swaddle your infant, the risk that they will roll over onto their side is increased.

This is due to the fact that swaddling creates a cylindrical surface that makes it easier for an infant to roll over on their side.

I want to mention that at this day the AAP has labeled swaddling an “unsafe” practice in childcare settings, and in Minnesota swaddling is illegal for child care centers since 2012.

You should change your infant’s sleep position each night.

This will prevent them from flattening their skull.

What is the Safest Sleeping Position for My Newborn and Why?

the best position for baby to sleep is on their backs.

This position can decrease the chances of your child not being able to breathe properly, as well as lower the risk of fevers, stuffy noses, and respiratory issues.

Placing your newborn on their back to sleep is essential in the first year of your newborn’s life because this is the time frame that the risk of death by SIDS is at its highest point.

but the sooner you start putting them in this position, the quicker they will get used to it.

Your newborn and your children are the most important things in your life.

You want to protect them from anything and everything that might hurt them.

If you follow the advice and steps that are listed in this article, you can increase the chances of your newborn having a happy, healthy, fulfilling life.

This article needs editing and rewriting. I almost could not follow it. Stopped reading at sids. Grammar and word choice needs changing.