My Milky Baby
Home Baby Care Why Does Your Baby Rubbing Nose? & How To Avoid It?

While babies are adorable, they can often be unpredictable and cause a significant amount of worry, especially if they’re your first child.

One second, they can be calm, cheerful, and quite quiet; the next, they can be screaming as though they’re in a lot of pain.

Alongside this are a few quirks that we may find strange, such as baby rubbing nose.

Some of us may wonder whether this is normal, as well as a variety of other things.

The majority of us mightn’t know what this means and may think that it’s caused by something major.

As a result of this, many parents might become extremely worried if a baby rubs their face regularly.

There are a few things that you should know about the behavior.

Baby Rubbing Nose, What Does It Mean?

Baby rubbing nose behavior can be much more common than you might think, with this being driven by a few causes.

In the majority of cases, you can rest assured that it shouldn’t be of a significant concern, although it is something that you should look to cut out.

Some of the causes may be much more obvious than you’d think, with some of the more common being:

Allergies are one of the most notable reasons why a baby will rub their face, although it’s something that many of us mightn’t expect.

There can be a variety of things that may cause these allergic attacks, which means that it can often be difficult to figure out why it starts.

One of the easiest ways to determine this is by looking at any new products that you’re using that come into contact with your child.

Because of this, you should aim to stop using any of these new products and see if your child stops rubbing their face.

Alongside this is any new food that you may be giving to your child.

While it’s natural that you’ll want to expand your child’s diet over time, this should be done with care.

In the majority of cases, if your child does have an allergy, they will suffer from a few other symptoms.

Some of the more notable of these are:

Teething is perhaps the most common reason why your child may be rubbing their face or nose, especially at certain ages.

Much of this is driven by the fact that they’ll be in a large amount of pain and discomfort, which they’ll try to reduce by rubbing their face or nose.

By doing so, they’re looking to soothe themselves, although this mightn’t have much of an effect.

Should your child be teething, then it’s likely that they’ll rub their face for most of the day.

There are a few things that you’ll be able to do to check if your child is teething, with one of the more common being to rub your pinky finger across their gums.

Though the first signs of a tooth shouldn’t appear quickly, they’ll become much more apparent over time.

There are a variety of products that you’ll be able to use to help reduce the symptoms of teething, which should then help reduce the number of times your child rubs their nose.

The temperature of a room is another reason why a baby may be rubbing their face, although it’s something that many of us mightn’t think of.

In the majority of cases, this will make your child uncomfortable, which then causes them to touch their face and nose.

This is a self-soothing sign that helps to distract from the discomfort of the temperature.

Because of this, it’s worth looking at how hot or cold a room is and aiming to change this to make it more comfortable for them.

In many cases, this will be seen during the changing of the seasons, which may explain why a baby will touch their face and rub their nose during these periods.

However, being proactive about keeping the room at a comfortable temperature can help prevent this.

Should the cause not be any of the above, there’s a small chance that your baby may be rubbing their nose randomly.

However, it can be highly recommended to be on the safe side and check with a medical professional.

Doing so will not only help you determine the underlying cause of the rubbing but also treat it.

In many cases, this shouldn’t be something major, although it’s still better to be on the safe side.

Regardless of what the cause is, it can help you to put your mind at ease once your baby is treated and stop rubbing their nose.

How To Stop A Baby Rubbing Its Nose?

While you mightn’t be able to diagnose the reason behind the baby rubbing nose behavior yourself, there are a few things that you can do to stop them from doing so.

The first of these is to wrap your child in a swaddle.

There are a few reasons behind this, with the most notable being that it prevents them from not only rubbing their face but also scratching themselves.

Naturally, this is something that you’ll want to avoid.

Alongside this, babies rubbing their faces could make them lose sleep.

Having them wrapped in a swaddle, however, prevents this and helps them feel more comfortable, which should result in a longer sleep than without one.

While a swaddle can often be recommended, it wouldn’t be when a baby is warm, for obvious reasons.

This doesn’t mean that there aren’t a few other things that you can try.

Using a baby mitten can be helpful, as it means that they shouldn’t be able to scratch themselves if they try to rub their face or nose.

It should be noted, however, that you’ll need to be careful when putting the baby mitten on.

It should be secure enough so that it wouldn’t come off when a baby rubs their face, but loose enough that it doesn’t cut off blood circulation.

While this may be somewhat difficult to do, it can help protect a baby’s face from unwanted scratches.

Though both of the above methods can be great at preventing self-inflicted scratches, they mightn’t do much in preventing your child’s urge to rub their face.

However, there are a few methods that you’ll be able to take advantage of to do so.

The first of these is to keep your baby’s room cool.

In many cases, it can be well worth investing in a thermometer and an air conditioner, with this being driven by a few key reasons.

One of the more notable of these is that a warm room can make your baby sweat, which can attract germs and other bacteria onto the skin.

While this may occasionally result in your child becoming sick, it mainly means that they’ll begin rubbing their face and other areas.

Much of this is because their skin is highly sensitive, so they’ll automatically try to get rid of any germs or dirt that’s on their face or nose.

you should be able to determine this by using a thermometer and air conditioner to find out what your baby prefers.

When you take this approach, it’s recommended that you place the thermometer as close to your child’s bed as possible.

Doing so should mean that you’ll get a more accurate determination of what temperature your child prefers.

While this may take several hours or days to figure out, it can be worth it.

with this primarily focusing on your child’s bedding and any other products that their face may come into contact with.

When it comes to their crib, you should make sure that you clean it as much as possible.

Doing so will help to avoid the build-up of any microorganisms that may be causing them to become itchy and rub their faces regularly.

When you’re doing so, you should use allergen-free products.

Before, these used to be quite tricky to find, although this hasn’t been the case in recent years, as there is now quite a large number of products available.

The same can also be said for any products you use to wash your babies and their clothes.

Because of how popular these have become, they can be much more affordable than you might think, and can often cost only a few dollars.

While baby rubbing nose behavior is quite common, it’s not something that should be allowed to continue for too long.

Though your child may occasionally rub their face or nose randomly, in many cases, it will be driven by one of the above.

Since a baby naturally can’t speak, their actions will speak volumes, which means that you’ll have to pay a significant amount of attention to what they do.

By focusing on the above, however, you should be able to avoid any potential negative causes. 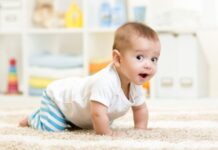 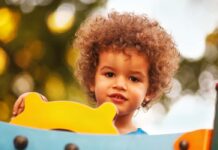 Mixed Race Baby Hair: Understand And Caring For It 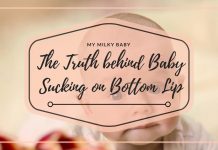 Guide To Figure Out Why Your Baby Sucking Bottom Lip!